HOW WELL DO YOU KNOW YOUR SWEETENERS? 22 December 2016 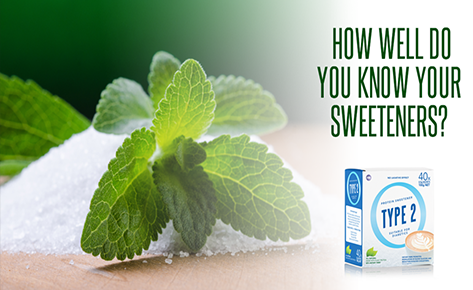 A vast majority of the population know that sweeteners fall into two broad categories- Artifical or Natural. BUT do you know what "Natural" and "Artificial" have in common? Although the term “Natural” has a tendency to give us some comfort it is always best to inform ourselves with what else is contained within these sweeteners. Sugar alcohols are one of the major ingredients in most Artifical and Natural sweeteners and in this short blog, we will do our best to explain what these are and how they may impact your health and well-being. Sugar alcohols are often found in reduced-calorie sweeteners. You are likely to find them even in sweeteners that are labelled as “Natural” You will come across them in ice creams, cookies, puddings, candies and chewing gum that are labelled as "sugar-free" or "no sugar added." A sugar alcohol (also known as polyols) usually contain fewer calories than regular sugar but don’t be fooled into thinking that it is always a better alternative. Often they form the bulk of what is contained within a sweetening product. When you buy a sweetener, TURN THE PACK AROUND and read any warning statements. If you find one that says - Excessive consumption of the sweetener will cause a laxative effect, then you know the culprit is most likely to be the sugar alcohol in the product. Sugar Alcohols CAN NOT be digested in the human digestive system, sometimes as little as 10grams of Sugar Alcohols can have a laxative effect, causing bloating, intestinal gas and diarrhoea. The sweeteners which contain sugar alcohols can cause gut issues such as flatulence, bloating and diarrhoea. Ironically even though they are called sugar alcohols, they do not contain alcohol. Most of these sugar alcohols are excreted in the urine, which can also increase the amount and frequency of urination. This increased urination may in-turn result in a higher loss of body minerals such as calcium, magnesium and potassium and possibly cause muscle cramping. Some people with blood sugar issues may also experience blood sugar spikes after consuming sweeteners and products that contain sugar alcohols Since all of these types of sugar substitutes contain some calories and carbs, be sure to count them into your daily totals if you are counting calories. What should I be looking for? When exploring Artificial and Natural Sweeteners turn the pack around and look for anything that ends with "...tol's" on the pack such as: Xylitol Has a laxative effect, but not as strong as sorbitol. As with all sugar alcohols, it increases urination and thirst. Also, when ingested in large amounts, xylitol can elevate uric acid levels in the blood (which could lead to kidney stones Maltitol In countries such as Australia, Canada, Norway, Mexico and New Zealand, maltitol carries a mandatory warning such as "Excessive consumption may have a laxative effect." In the United States, it is a generally recognised as safe (GRAS) substance, with a recommendation of a warning about its laxative potential when consumed at levels above 100 grams per day. Sorbitol Ingesting large amounts of sorbitol can lead to abdominal pain, flatulence, and mild to severe diarrhoea. It has a strong laxative effect, can cause severe diarrhoea, and can aggravate gastrointestinal conditions such as IBS and Crohns Erythritol Doses over 50 grams (1.8 oz) can cause a significant increase in nausea and stomach rumbling. In comparison to some of the other sugar alcohols, it is also much more difficult for intestinal bacteria to digest, so it is least likely to cause gas or bloating  Glycerol In May of 2007, the FDA issued warnings to food and drug manufacturers to test their supply of glycerin for diethylene glycol (DEG) a poison used in antifreeze. Web MD describes the side effects of Glycerol “When taken by mouth, glycerol can cause side effects including headaches, dizziness, bloating, nausea, vomiting, thirst, and diarrhoea.” Lactitol Like most other sugar alcohols, lactitol causes cramping, flatulence, and diarrhoea in individuals who consume it. This is because humans lack a suitable beta-galactosidase in the upper gastrointestinal (GI) tract, and a majority of ingested lactitol reaches the large intestine,] where it then becomes fermentable to gut microbes (prebiotic) and can pull water into the gut by osmosis. Those with health conditions should consult their GP or dietician before consumption Others that do not end in “…ols” Polydextrose Polydextrose is not universally well tolerated. Doses as low as 10g cause significantly more intestinal gas and flatulence Isomalt Can cause serious gastrointestinal distress - lots of gas and bloating - if consumed in large amounts (over 50g/day). Over time, adaptation may lessen this effect. If you suffer from side these side effects such as bloating, stomach discomfort or diarrhoea from your current sweetener, then you might find a more satisfying option from a sweetener that does not contain sugar alcohols. Keep a look out for a new generation of sweeteners that do not contain sugar alcohols in you pharmacy and grocery stores. Xylitol-induced increase in the concentration of oxypurines and its mechanism.